Frederick Douglass (c. February 1818—February 20, 1895), one of the most brilliant orators of his generation, worked ceaselessly for the cause of abolition. Among his many achievements, Douglass became one of the early and important critical theorists of photography, a medium invented in 1839. In a series of lectures delivered between 1861-865, Douglass argued that photography had the power to shape people’s understandings of race and as such could be deployed to resist distorted representations of African Americans. Douglass, who was exceptionally aware of the power of his own image, sat for a number of portraits over several decades, circulating his image widely. His photographic portraits serve as the basis for a number of the works in this collection, including Ivan Schwartz’s Frederick Douglass, created for the New York Historical Society. 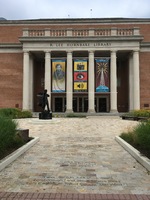 Full-size sculpture of Frederick Douglass portrays him in the middle of a speech, with one arm outstretched, and a copy of his autobiography under the other arm. His coat/cape billows out behind him in a swath of bronze. 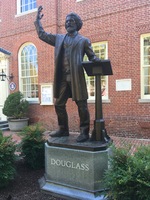 Standing to the right of a lectern, Frederick Douglass is depicted as in elder statesman, with a furrowed brow and deep lines marking his face. Captured mid-speech, Douglass raises his right hand above his head in a rhetorical gesture, while his… 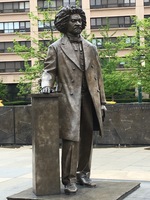 Standing to the right of a lectern, Gabriel Koren modeled Frederick Douglass is depicted as an elder statesman, with a furrowed brow and a deeply lined face. Resting his right hand atop the lectern, Douglass’ mouth is closed as he stares resolutely…

The ten-foot-tall bronze statue of a young Frederick Douglass casts his gaze forward and ever-so-slightly downward toward an imagined viewer. Standing squarely forward, Douglass' left knee is slightly raised as if he were on the verge of walking off… 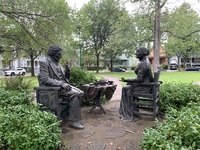 Seated in simple wooden chairs, Frederick Douglass and Susan B. Anthony engage in conversation over tea. On a table between them sits a tea pot, to tea cups and saucers, and two books. Douglass leans forward, his gaze cast slightly downward,…

An elder Frederick Douglass is depicted seated on a scissors chair— the armrests are adorned with the faces of open-mouthed lions, while the chair’s legs have been carved in the shape of lion’s legs. In bas-relief, the chair’s back is embellished… 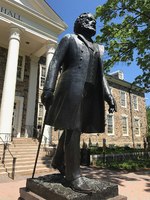 Caught mid-stride, the over life-size bronze statue of Frederick Douglass stands in front of Holmes Hall on the campus of Morgan State University, a historically black university in Baltimore, MD. The bearded Douglass holds a cane in his right hand…

Located on Hillsdale College’s Liberty Walk, the bronze statue of Frederick Douglass is the first African American figure to be included on the Liberty Walk. The bearded Douglass clasps his hands around a book, his torso turning gently leftward as he…

A life-size sculpture of the abolitionist Frederick Douglass stands atop the staircase at the West 77th Street entrance to the New-York Historical Society. Douglass gazes forward, holding a pair of books in his left hand, while his right arm rests…

The six-foot-tall bronze head of an elder Frederick Douglass is located in the Frederick Douglass-Isaac Myers Maritime Park in Baltimore’s southeastern waterfront. The textured and rough surface of Robinson’s work creates a sense of movement as light…
View all 12 items