The monuments and memorials in this section honor the vital contributions of the United States Colored Troops (USCT) in the Union victory during the Civil War. On May 22, 1863, the U.S. War Department created the Bureaus of Colored Troops. By the end of the Civil War ended, nearly 180,000 men, including white officers, served in 175 regiments of USCT, which made up six percent of the Union army. The monuments in the sections are located across the nation from the Memorial to the 2nd Regiment Infantry in Fort Myers, Florida, to the Solider Memorial at Lincoln University in Jefferson City, Missouri.

The work depicts three infantrymen and a sailor. Above the group is a personification of the "Spirit of Freedom." The other side of the statue includes a scene of a soldier and his family.

The over life-sized work depicts a sergeant in the United States Colored Troops 2nd Regiment standing infront of an open gate within a wall. The soldier is framed by two granite plaques mounted on each wall. The plaque on the left is a description of… 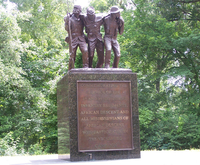 The monument depicts three bronze figures, two African American Union soldiers and a civilian field hand. The field hand and a soldier support a second soldier, who has been wounded in a Civil War battle. 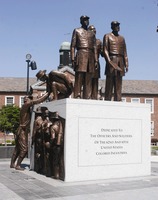 The monument depicts the members of the 62nd and 65th United States Colored Infantry who, in 1866, founded Lincoln University in Jefferson City, MO. The work includes two soldiers and Capt. Foster, their white commander, who all are shown atop a…

The work commemorates members of the 54th Volunteer Infantry, the first documented African American regiment to be formed during the Civil War. Colonel Shaw, the regiment’s leader, is shown on horseback with three rows of infantrymen marching behind… 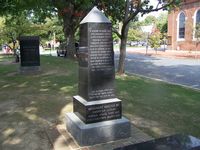 The stone obelisk is dedicated to the memory of more than 400 colored trooped from Kent County, Maryland who served in the Union Army during the Civil War. In front of the obelisk is a stone bench.

The life-sized bronze statue of a single black soldier honors the contributions of the 1st Kansas Colored Volunteer Infantry to the Union Army.

The memorial consists of a rectangular stone marker that comes to a point and sits atop a concrete base. The marker is engraved with text on two sides and is accompanied by a North Carolina Civil War Trails marker and informational placard.

The life-sized bronze statue of a single black soldier honors the contributions of the over 20,000 African American men from Tennessee who served in the Union Army. 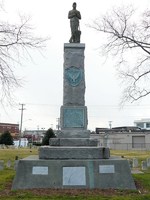 Atop a large square column of stone, the figure of the Norfolk native Sergeant William H. Carney of the 54th Massachusetts Volunteer Regiment is depicted, dressed in his military uniform. The base of the monument, built as a tribute to African…
View all 19 items