The memorial and monuments in this collection are dedicated to the Underground Railroad, an organized network of routes and safe houses that assisted freedom seekers [enslaved people] on their journeys northward. The Underground Railroad was part of the larger movement for the abolition of slavery in the United States. The movement to abolish slavery was a complicated political movement that, at its core, was driven by the resistance and activism of enslaved Black people and freedmen and women abolitionists. Manisha Sinha explores the history of American abolition, including the Underground Railroad in The Slave’s Cause: A History of Abolition.

Although Harriet Tubman is the most famous conductor in the Underground Railroad, she is not the subject of the memorials featured in this collection (see Harriet Tubman for a collection of works specifically dedicated to her life and work). Rather the monuments and memorial featured here, such as Ed Dwight's Gateway to Freedom: International Memorial to the Underground Railroad, highlight other prominent conductors, as wells celebrate the fortitude and bravery of the freedom seekers as they made the perilous journey north.

A multifigure statue that includes portraits of Erastus and Sarah Hussey, abolitionists and Underground Railroad conductors in southern Michigan as well as an image of Harriet Tubman. 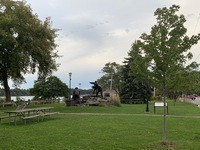 The monument consists of five bronze sculptures. The subjects are a family of freedom seekers including a father, mother and baby; Lewiston's Underground Railroad Station Master, Josiah Tryon; and the fictional heroine, Laura Eastman, from the…

Preston Jackson‘s monumental bronze and stainless steelKnockin’ on Freedom’s Door is located on the site of the former Pettengill House in Peoria, an important station on the Underground Railroad. The work features multiple bronze sculptural groups… 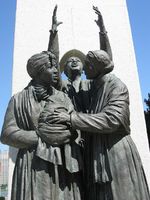 The Canadian counter-part to Ed Dwight's Gateway to Freedom, Tower of Freedom consists of a twenty-two-foot high granite tower, adorned with a bronze flame symbolizing the “Eternal Flame of Freedom.” Life-size bronze figures stand on opposite sides… 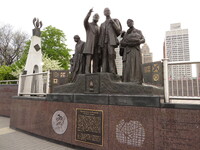 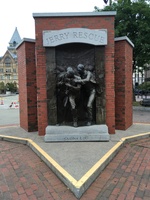 A concrete four-pointed star serves as the sculpture’s plinth. Three brick and concrete walls form a niche, which viewers are invited to physically occupy. Affixed to the brick walls, the niche contains bronze plaques explaining the history of Jerry… 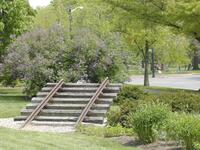 Railroad tracks emerge from the ground, reaching upward. This sculpture commemorates Oberlin's role in the Underground Railroad. Cameron Armstrong (then a senior at Oberlin College) created the sculpture in 1977 as part of a class art project.

A low relief that depicts three freedom seekers against the map of Ohio: a father, mother, and young boy. The male figure is show in profile wearing a soft brimmed hat, holding a walking cane, and dressed in simple shirt and pants with worn shoes ( a… 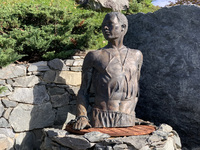 The statue depicts a male freedom seeker from the waist up. His head is turned to his right shoulder, looking back toward the south and leaning to the north as he presses down with his hands on a stone circle to hoist himself out of an underground…
View all 9 items