The monuments in this collection address the life and legacy of Sojourner Truth, the tireless abolitionist, feminist, and brilliant orator. Truth was born into slavery in 1797 in Swartekill, New York. She emancipated herself, escaping to freedom in 1826. During her 30 year career, she became a formidable force in several 19th-century reform movements, linking the struggles for Black freedom with women’s suffrage.

Truth capitalized on both the affecting power of photography and its reproducibility to support her activism. She created carte-de-visite portraits of herself, which she copyrighted, adding the caption “I Sell the Shadow to Support the Substance. Sojourner Truth.” As Darcy Grimaldo Grigsby explores in her book Enduring Truths: Sojourner’s Shadows and Substance, Truth “made her photographic portrait worth money in order to end slavery—and also became the strategic author of her public self.” Many of the monuments and memorials to Sojourner Truth featured in this collection are based on the photographic portrait that Truth so carefully created and circulated.

The monumental bronze figure of Sojourner Truth stands behind a concave wall, on an elevated semi-circular stage. She stands to the left of a lectern, her left arm outstretched at her side as she looks out at an imagined audience. She places her…

The life-size bronze figure of Sojourner Truth stands at the center of a square granite base. Truth is shown bespectacled, wearing a period-appropriate head covering, long scarf, and floor-length dress. Her arms are open at her side, in an inviting… 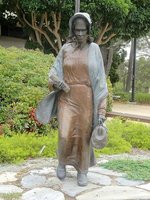 The life-size bronze figure of Sojourner Truth holds a bible in her right hand and handbag in her left. Clad in a simple, unstructured dress, bonnet, and shawl draped around her shoulders, Truth strides forward. 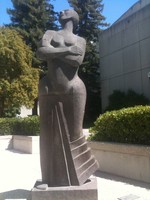 Unlike many sculptural representations of Sojourner Truth, Elizabeth Catlett’s work is geometrized and slightly abstracted. Truth is shown with her arms crossed at her chest as she tilts her head skyward, her eyes closed. The flared skirt of her… 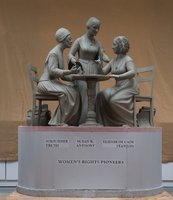 In July 2018 the Monumental Women Statue Fund unveiled a planned Central Park monument to women’s suffrage, featuring Elizabeth Cady Stanton and Susan B. Anthony. The announcement was met with widespread criticism for, not only its exclusion of…
View all 5 items