African Burying Ground Memorial (We Stand in Honor of Those Forgotten) (Portsmouth, NH) 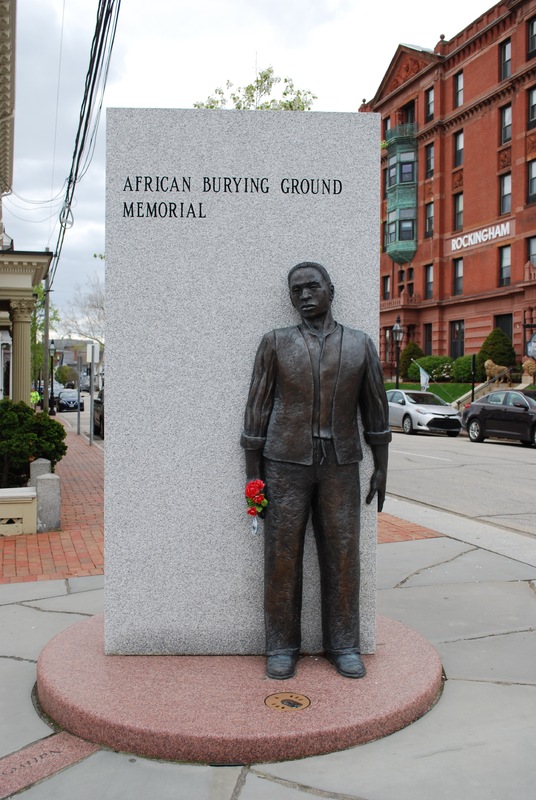 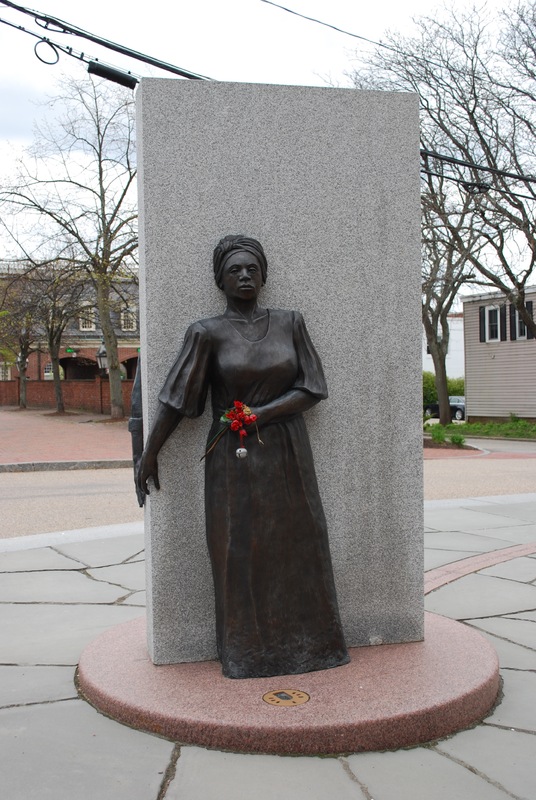 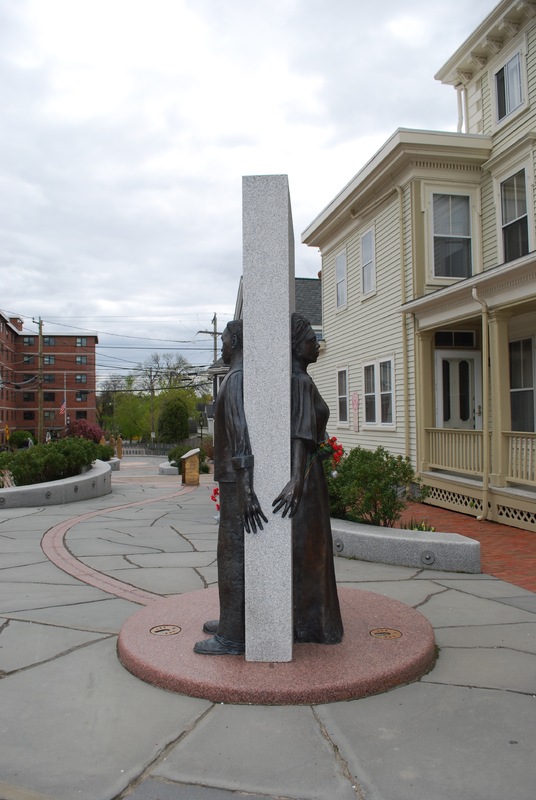 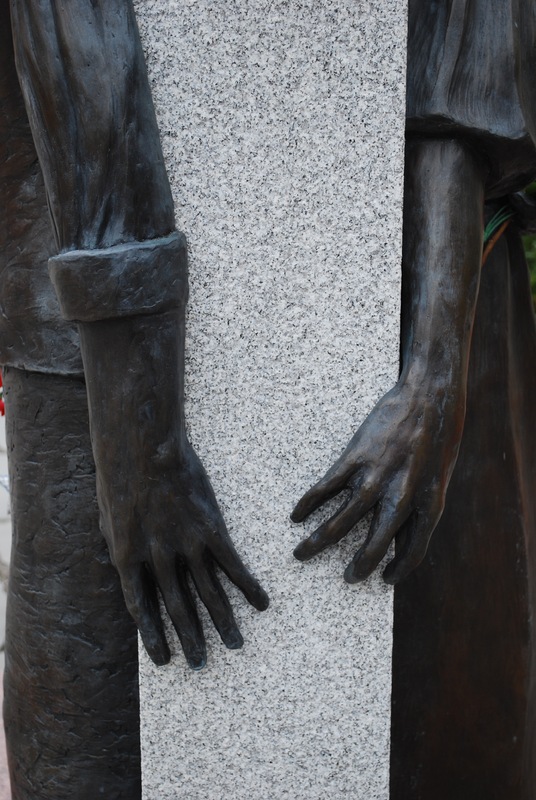 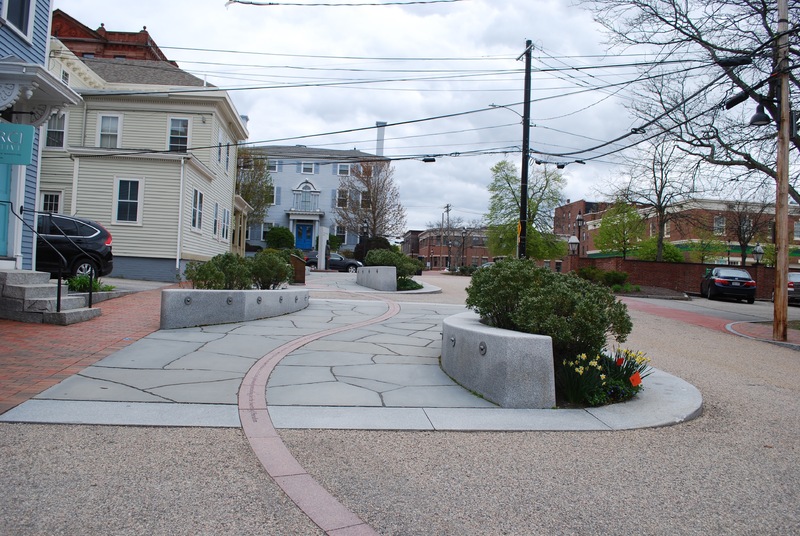 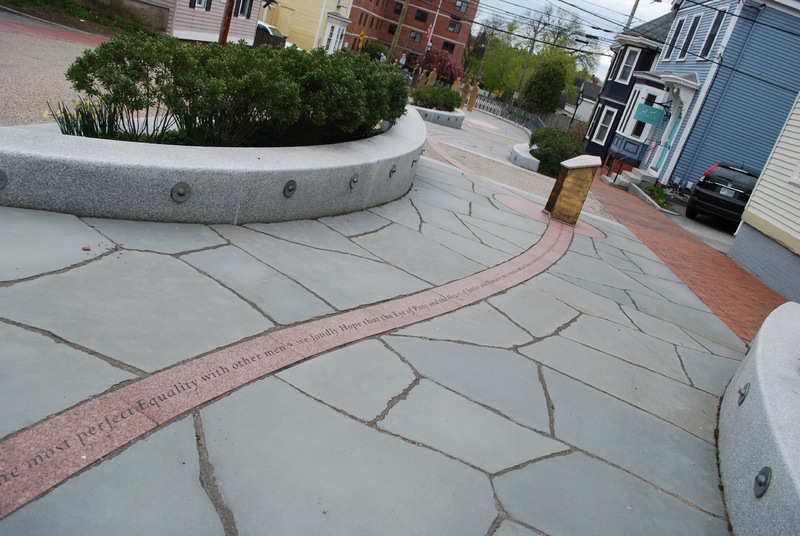 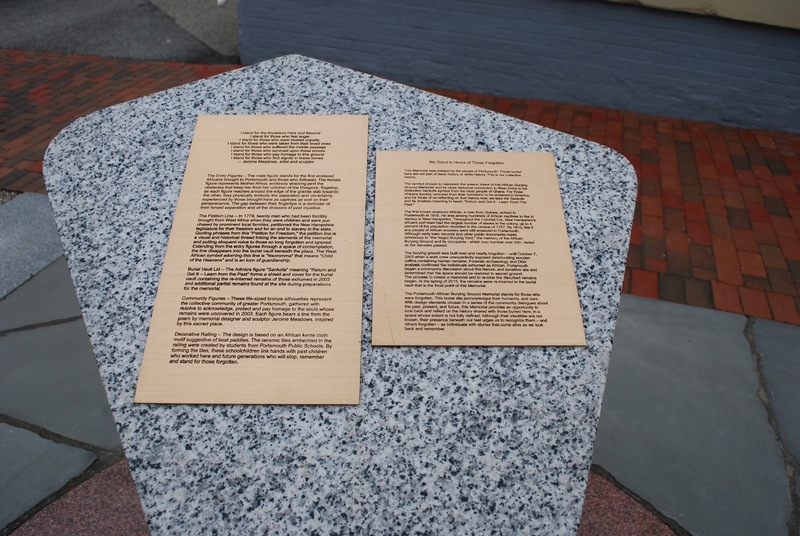 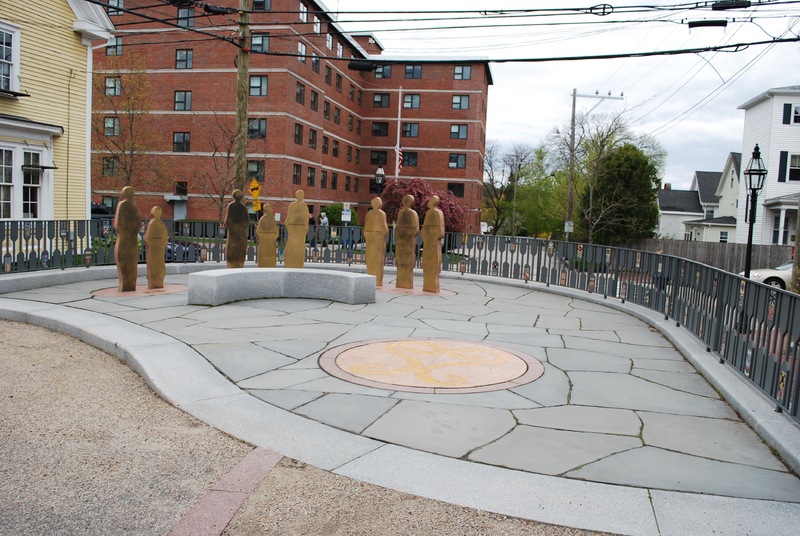 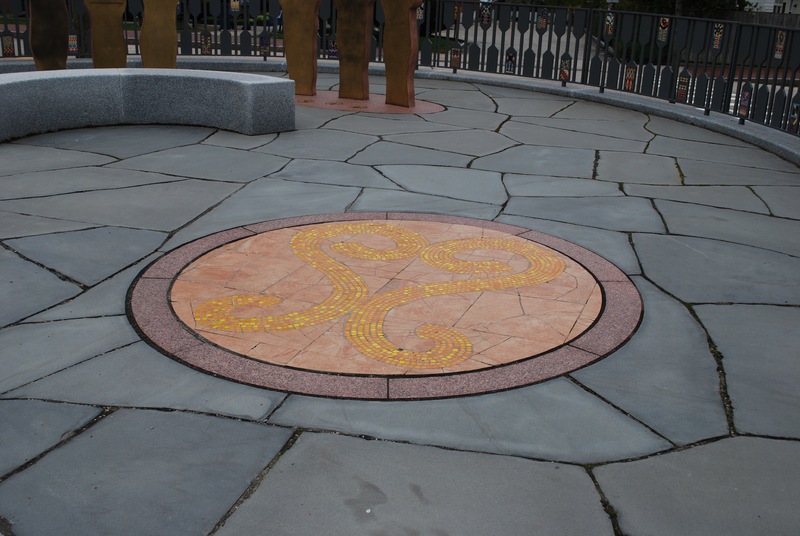 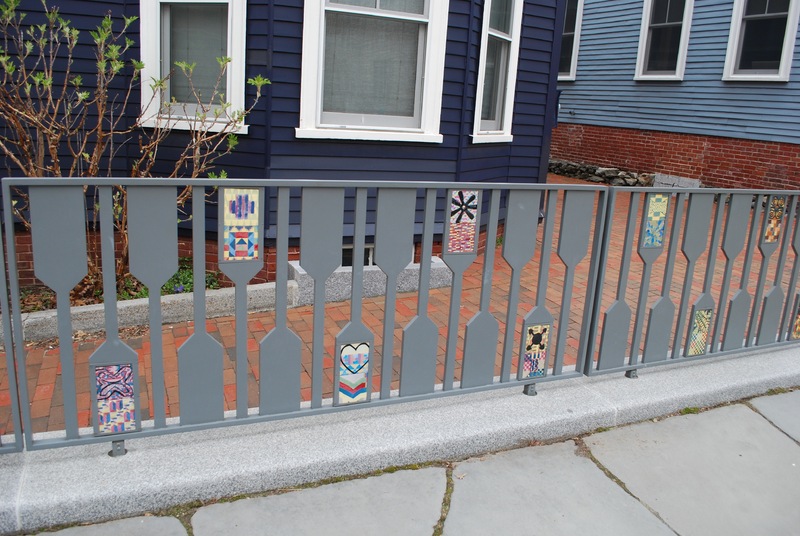 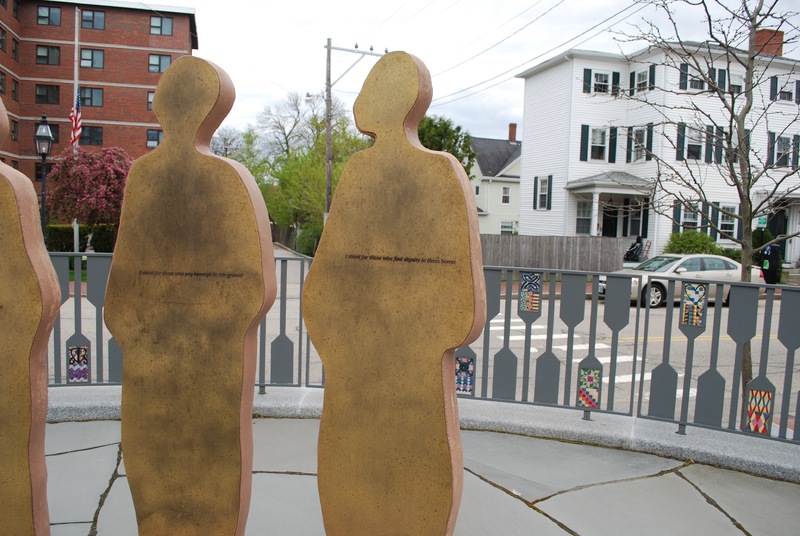 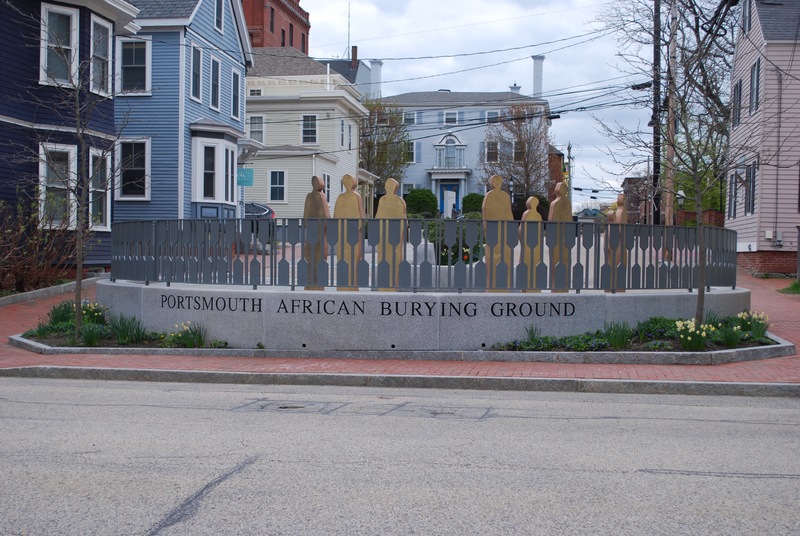 African Burying Ground Memorial (We Stand in Honor of Those Forgotten) (Portsmouth, NH)

The memorial is composed of a number of distinct elements. A rectangular granite stele on State Street marks the memorial’s entrance. On one side, below the engraved text that reads “African Burying Ground Memorial,” a life-size bronze figure of a man stands with his back against the stone stele. His left-hand reaches out and back, towards the other side of the stele. On the opposite side, a life-size bronze figure of a woman mirrors the gesture of her male counterpart. The sculptor, Jerome Meadows, leaves a gap between the outstretched hands of the two figures.

On the opposite end of the memorial, a group of eight life-size vertical bronze and concrete silhouettes, each inscribed with a line from a poem written by Meadows, stand in a semi-circle around the burial vault. The figural group is surrounded by a metal railing, embellished with ceramic tiles. The design of the 110 ceramic tiles is inspired by Kinte cloth patterns and based on the original drawings created in a workshop Meadows facilitated with students from a local middle school. The burial vault contains the re-interred remains of the 13 individuals found on the site in 2003. The vault is marked with a Sankofa, a West African Adinkra symbol that means “Return and Get It — Learn from the Past.”

The sculptural groups are connected by the “Petition Line,” a ribbon of pinks stone, which contrasts with the gray stone walkway of the memorial. The Petition Line contains excerpts from a formal document submitted to the New Hampshire legislature in 1779 by 20 enslaved individuals petitioning for their freedom. To the right is an information marker that provides visitors with the historical context for the memorial, as well as the poem by Meadows - I Stand For Those Forgotten.

The Entry Figures--The male figure stands for the first enslaved Africans brought to Portsmouth and those who followed. The female figure represents Mother Africa, endlessly straining past the obstacles that keep her from her children of the Diaspora. Together, as each figure reaches around the edge of the granite slab towards the other, they physically embody the separation and uncertainty of those brought here as captives as well as their perserverance. The gap between their fingertips is a reminder of their forced separation and of the divisions of past injustices.

The Petition Line--In 1779, twenty men who had been forcibly brought from West Africa when they were children and were purchased by prominent local families, petitioned the New Hampshire legislature for their freedom and for the end of slavery in the state. Quoting phrases from this “Petition for Freedom,” the petition line is a visual and historical thread linking the elements of the monument and putting eloquent voice to those so long forgotten and ignored. Extending from the entry figures through a space of contemplation, the line disappears into the burial vault beneath the plaza. The West African symbol adorning this line is “Nsoromma” that means “Child of the Heavens” and is an icon of guardian ship.

Burial Vault Lid--The Adinkra figure “Sankofa” meaning “Return And Get It--Learn From The Past” forms a shield and cover for the burial vault containing the reinterred remains of those exhumed in 2003 and additional partial remains found at the site during preparations for the memorial.

Community Figures--These life-sized bronze sihouettes represent the collective community of greater Portsmouth, gather with resolve to acknowledge, protect, and pay homage to the souls whose remains were uncovered in 2003. Each figure bears a line from the poem by the memorial designer and sculptor Jerome Meadows, inspired by this sacred place.

Decorative Railing--The design is based on an African Kente cloth motif suggestive of boat paddles. The ceramic tiles embedded in the railing were created by students from Portsmouth Public Schools. By forming the tiles, these school children link hands with past children who worked here and future generations who will stop, remember, and stand for those fogotten.

Second bronze plaque on Information Marker:
We Stand In Honor Of Those Forgotten

This Memorial was created by the people of Portsmouth. Those buried here are not part of black history or white history. This is our collective history.

The symbol chosen to represent the solemn intent of the African Burying Ground Memorial and its close historical connection to West Africa is the distinctive Sankofa symbol from the Akan people of Ghana. For those Africans forcibly removed from their homeland to be enslaved in America, and for those of us reflecting on that history now, we take the Sankofa and its timeless meaning to heart: “Return And Get It--Learn From The Past.”

The first known enslaved African, a man from Guinea, arrived in Portsmouth in 1645. He was among hundreds of African captives to live in slavery in New Hampshire. Throughout the Colonial Era, New Hampshire's affluent port had the largest number of slaves in the colony, up to 4 percent of the population recorded in the census of 1767. By 1810, few if any people of African ancestry were still enslaved in Portsmouth. Although early town records and other public documents made references to the “Negro Burying Yard,” the memory of the African Burying Ground and its occupants--which may number over 200--faded as the decades passed.

The burying ground was built over and nearly forgotten--until October 7, 2003 when a work crew unexpectedly exposed deteriorating wooden coffins containing human remains. Forensic archaeology and DNA analysis confirmed the individuals exhumed as African. Portsmouth began a community discussion about this historic and sensitive site and determined that space should be restored to sacred ground. The process to create a memorial and to re-inter the disturbed remains began. In the spring of 2015, the remains were re-interred in the burial vault that is the focal point of this Memorial.

The Portsmouth African Burying Ground Memorial stands for those who were fogotten. The burial site acknowledges their humanity, and ours. With design elements chosen in a series of community dialogues about the past, present, and future, this Memorial provides an opportunity to look back and reflect on the history shared with those buried here, in a space whose extent is not fully defined. Although their identities are not known, their presence beneath our feet urges us to recognize them--and others forgotten--as individuals with stories that come alive as we look back and remember.