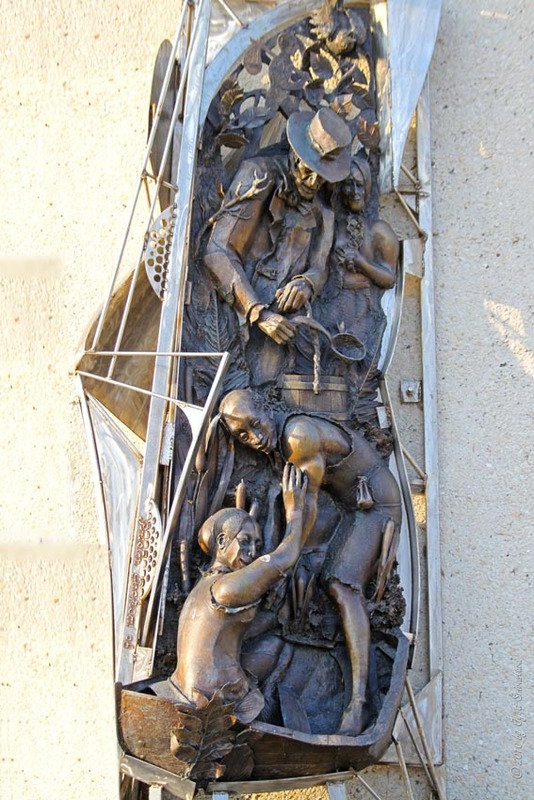 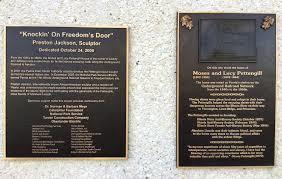 Preston Jackson‘s monumental bronze and stainless steel Knockin’ on Freedom’s Door is located on the site of the former Pettengill House in Peoria, an important station on the Underground Railroad. The work features multiple bronze sculptural groups within a stainless steel frame. The sculptural grouping includes a male and female freedom seeker, climbing out of a small rowboat as two white members of the Underground Railroad look down upon the pair. The pair of Underground Railroad conductors are presumably Moses and Lucy Pettengill. Moses holds a bucket of water in one hand and a ladle in the other, while Lucy clutches at her chest. At the very top of the sculpture, looking down over the scene is a portrait of Abraham Lincoln in profile.

From the 1840s to 1860s, the Moses and Lucy Pettengill House at the corner of Liberty and Jefferson was a safe house for hunted slaves escaping north along the Underground Railroad to freedom.

Preston Jackson, internationally known African American sculptor and a resident of Peoria, was commissioned to create a public artwork that expressed the drama and raw emotions of slaves’ flight to the north along with the generosity of Pettengills, close friends of Abraham Lincoln.

Second plaque, which includes a relief of the home of Moses and Lucy Pettengill:

“On this site stood the house of Moses and Lucy Pettengill Moses Pettengill [1802-1883] Lucy Pettengill [1802-1864] The house was noted as Peoria's station on the Underground Railway Network from the 1840s to the 1860s. Fleeing slaves were given food and refuge in this home. The Pettengills helped the escaping slaves with their dangerous journey along the Illinois River on their way to Farmington, Lawn Ridge and Princeton. The Pettengills assisted in founding: Illinois State Anti-Slavery Society [Oct 1837] Peoria Anti-Slavery Society [Feb 1844] Illinois State Female Anti-Slavery Society [May 1844] Abraham Lincoln was their intimate friend, and came to the home many times to discuss political affairs with the ardent Whigs. “In my own experience of about fifty years of opposition to intemperance, Secret Societies, and slavery, I have had the blessing of an approving conscience which is far more valuable than gold and silver.” -