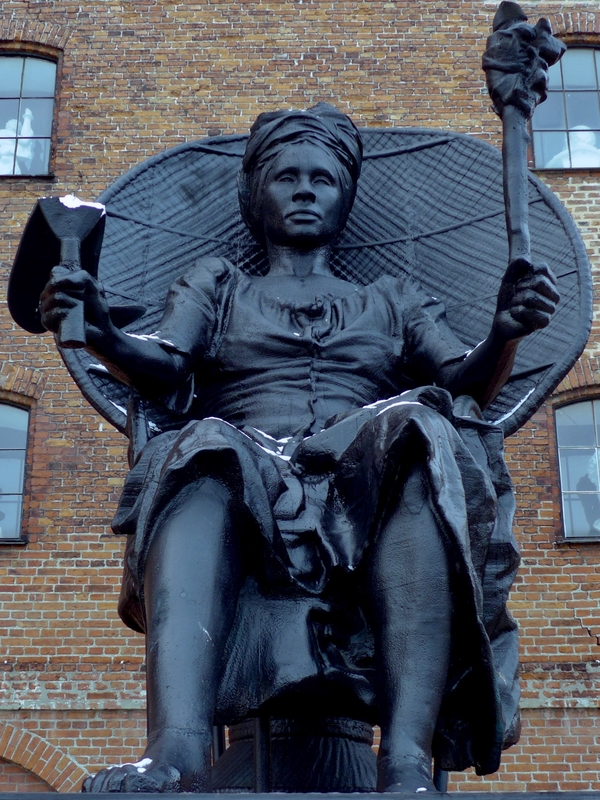 An imposing figure of a woman stares straight ahead, seated barefoot on a wide-backed chair. She holds a torch in one hand and a tool used to cut sugar cane in the other. The sculpture was inspired by Mary Thomas, one of the Three Queens of St Croix. Thomas, along with two other women, led an uprising in 1878 called the “Fireburn.” Fifty plantations and most of the town of Frederiksted in St. Croix were burned, in the largest labor revolt in Danish colonial history.

Visually, the work reminds viewers of the long and sustained history of the black freedom struggle. According to the artists, the torch and the cane bill are symbols of colonial resistance, while Queen Mary's seated pose mirrors the 1967 photograph of Huey P. Newton, founder of the Black Panther Party.

The statue’s plinth incorporates the coral foundations of historic buildings on St. Croix, which were cut from the ocean by enslaved Africans. The work's unveiling coincided with the centennial year commemorating Denmark's sale of the islands of St. Croix, St. John, and St. Thomas to the United States in 1917. The work sits in front of what was once a warehouse for Caribbean sugar and rum, and just over a mile from where Thomas was jailed after her arrest for her role in the labor uprising. Convicted of arson and looting and sentenced to death, her sentence was commuted to life imprison. In 1882 Thomas was transferred to Copenhagen and placed at the Women's Prison, Christianshavn, but in 1887 was sent back to Christiansted, St. Croix to serve the remainder of her sentence.

To learn more about the artists and inspiration for the work, click here.