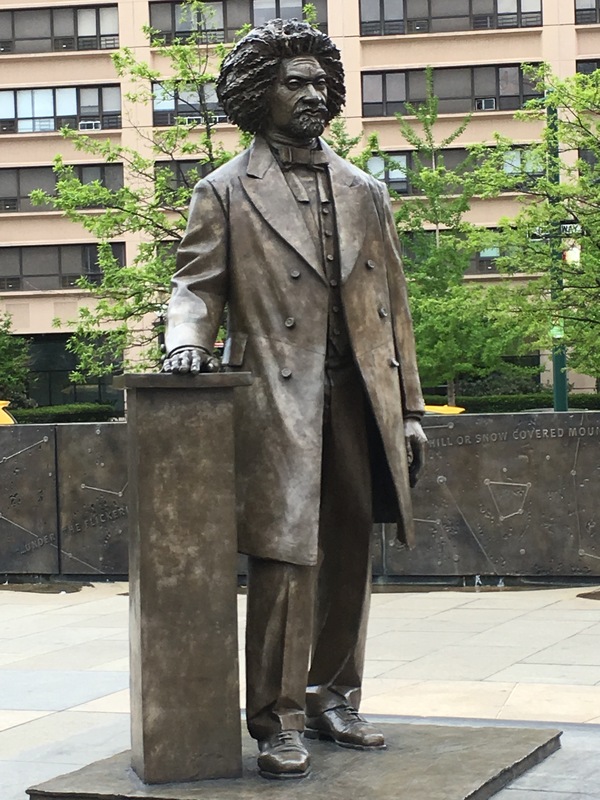 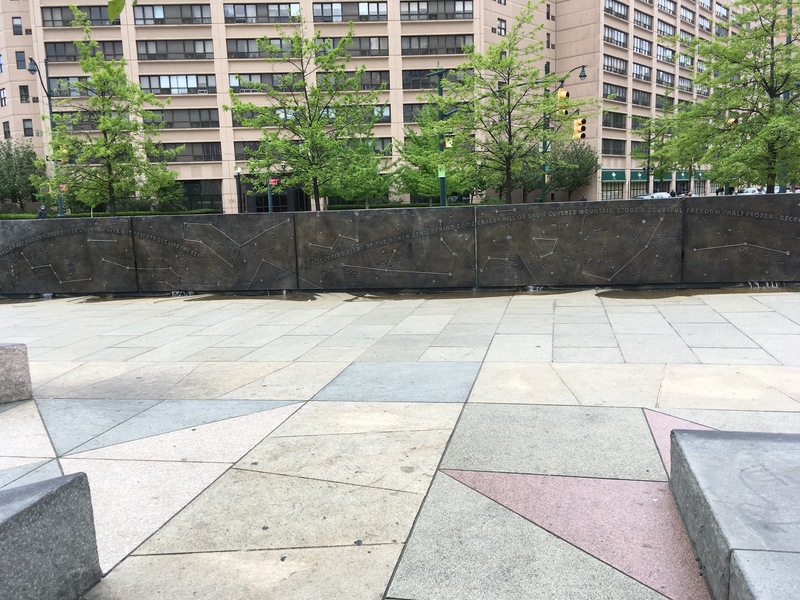 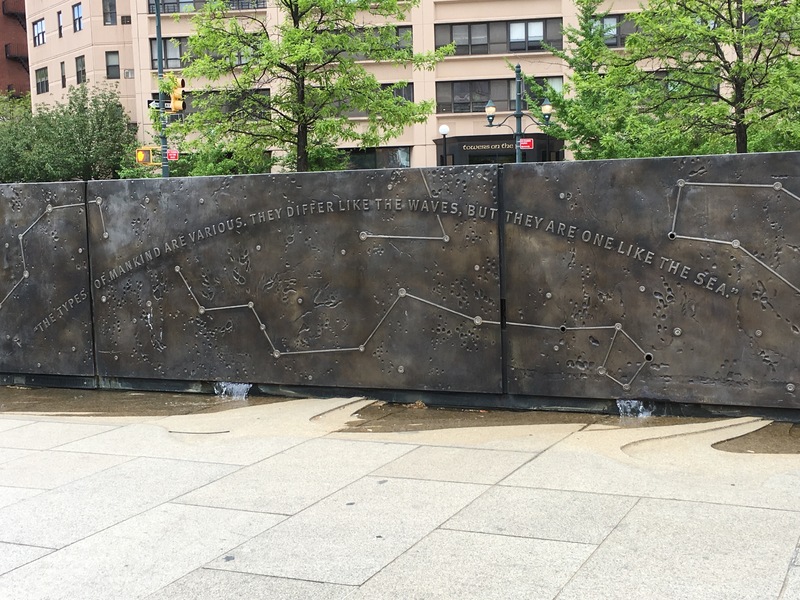 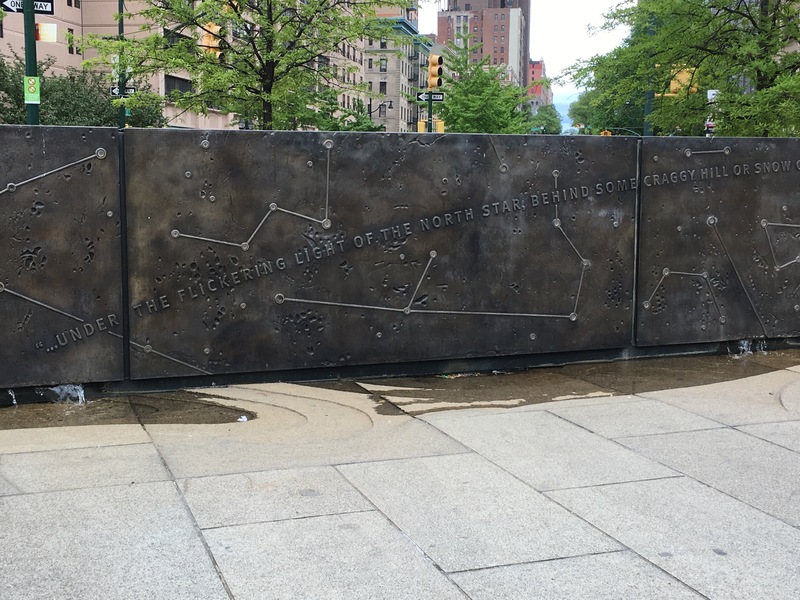 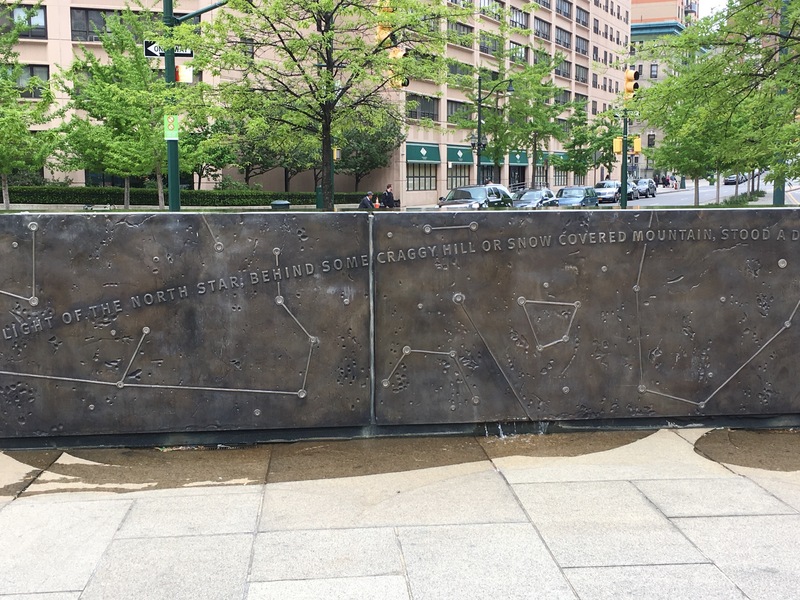 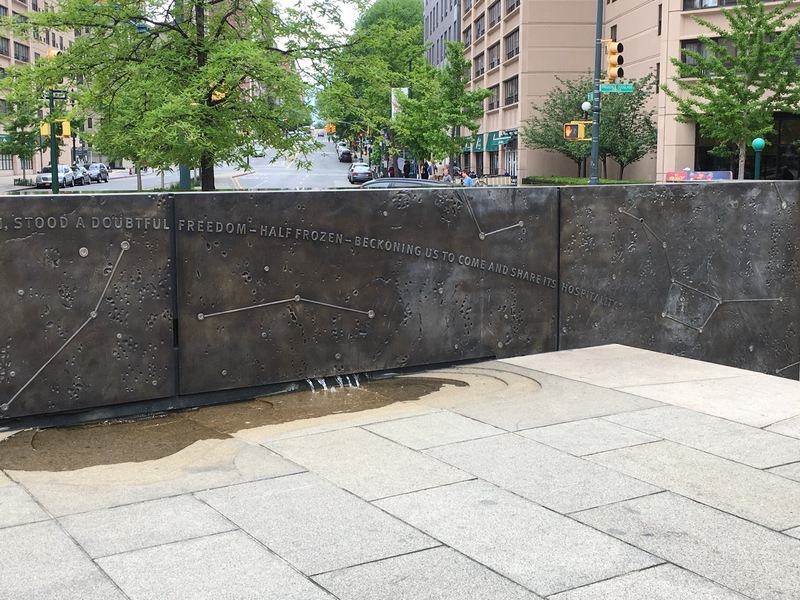 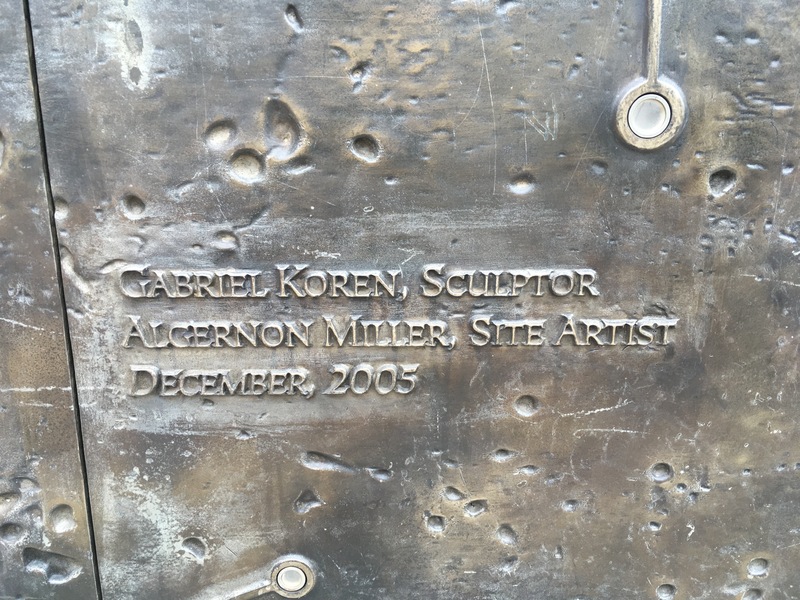 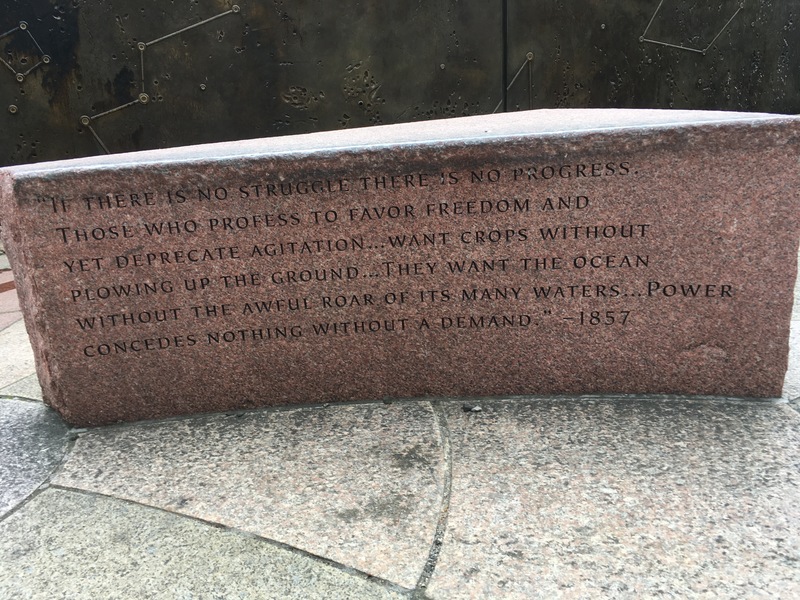 Standing to the right of a lectern, Gabriel Koren modeled Frederick Douglass is depicted as an elder statesman, with a furrowed brow and a deeply lined face. Resting his right hand atop the lectern, Douglass’ mouth is closed as he stares resolutely forward. Algernon Miller designed the granite seating and paving patterns, which are based on traditional African-American quilt motifs, as well as a bronze perimeter fence with a wagon wheel motif. Miller also created a bronze water wall that shows the Big Dipper constellation with the North Star. Quotations from Douglass embellish the site.

Inscription on granite block 4:
"Whatever may be said as to a division of duties and avocations, the rights of man and the rights of woman are one and inseparable, and stand upon the same indestructible basis." -1851

Inscription on granite block 5:
"The flight was a bold and perilous one; but here I am, in the great city of new york, safe and sound, without the loss of blood or bone." -1855

Inscription on granite block 6:
"Such is my detestation of slavery, that I would keep the merciless slaveholder profoundly ignorant of the means of flight adopted by the slave. he should be left to imagine himself surrounded by myriads of invisible tormentors..." -1855

Inscription on granite block 7:
"Of my father I know nothing. Slavery had no recognition of fathers, as none of families." -1845

Inscription on granite block 8:
"If there is no struggle there is no progress. Those who profess to favor freedom and yet deprecate agitation...Want crops without plowing up the ground...They want the ocean without the awful roar of its many waters...Power concedes nothing without a demand." -1857

Inscription on pavement:
"Right is of no sex - truth is of no color - god is the father of us all, and we are all brethren" -Masthead of the North Star

Born into slavery in Maryland, Frederick Bailey found the way to freedom along the underground railroad in 1838. Disguised as a sailor, he traveled to manhattan by ship, and found shelter at the house of abolitionist David Ruggles on Lispenard Street. There, he awaited the arrival of his fiancee, Anna Murray, a free black woman from Maryland. They married, and together continued bailey's freedom journey to Massachusetts, where he changed his name to Douglass. Lauded for his oration, he became a prominent abolitionist and purchased his legal freedom from slavery. Publisher of the abolitionist journal the north star, he championed freedom for all Americans and endorsed women's suffrage. Douglass later held posts as assistant secretary of the Santo Domingo Commission (1871), Marshall of the District of Columbia (1877-1881) and U.S. Minister to Haiti (1889-1891). Following the death of his wife in 1884, Douglass married Helen Pitts. He died in Washington, D.C. On February 20, 1895.

Inscription across fountain with constellations:
"The types of mankind are various. They differ like the waves, but they are one like the sea."

". . . Under the flickering light of the north star behind some craggy hill or snow covered mountain, stood a doubtful freedom - half frozen - beckoning us to come and share its hospitality."