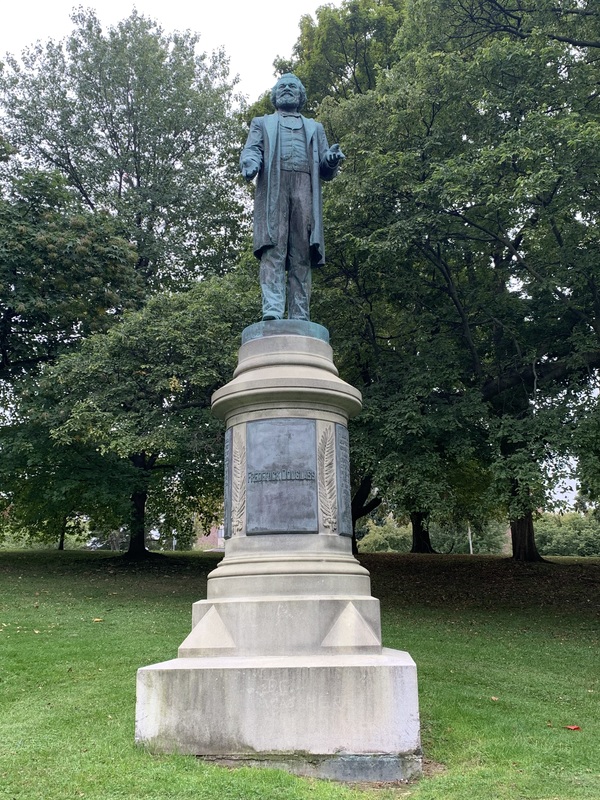 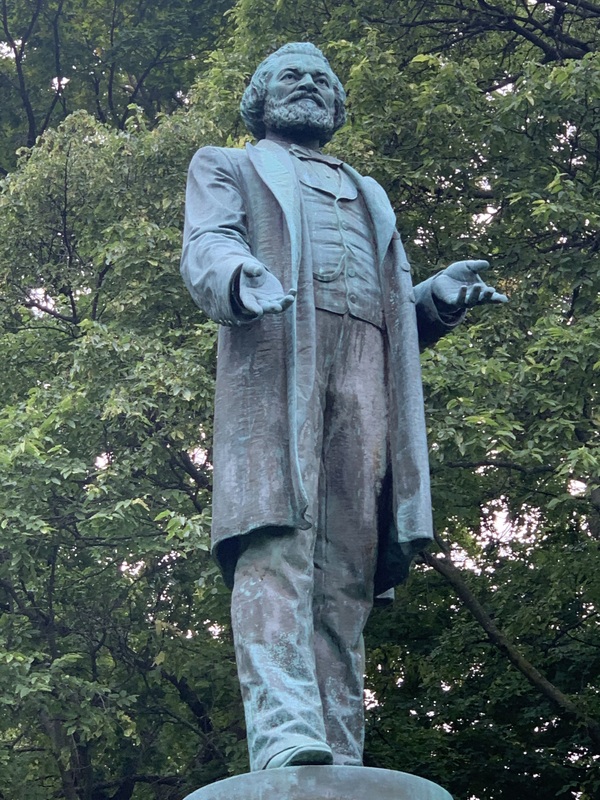 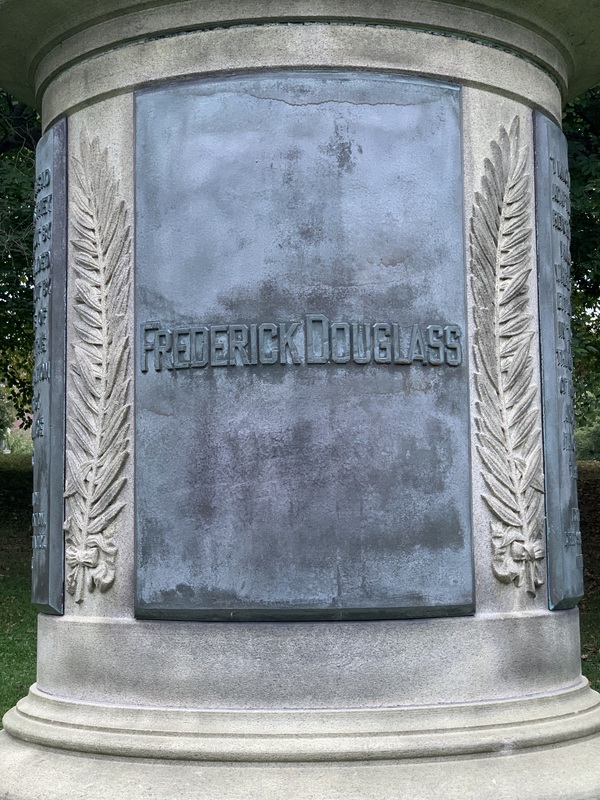 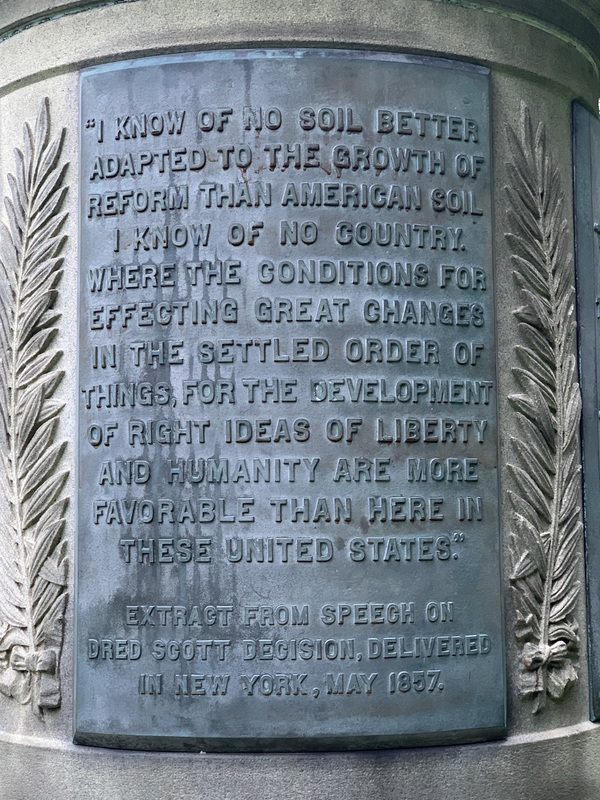 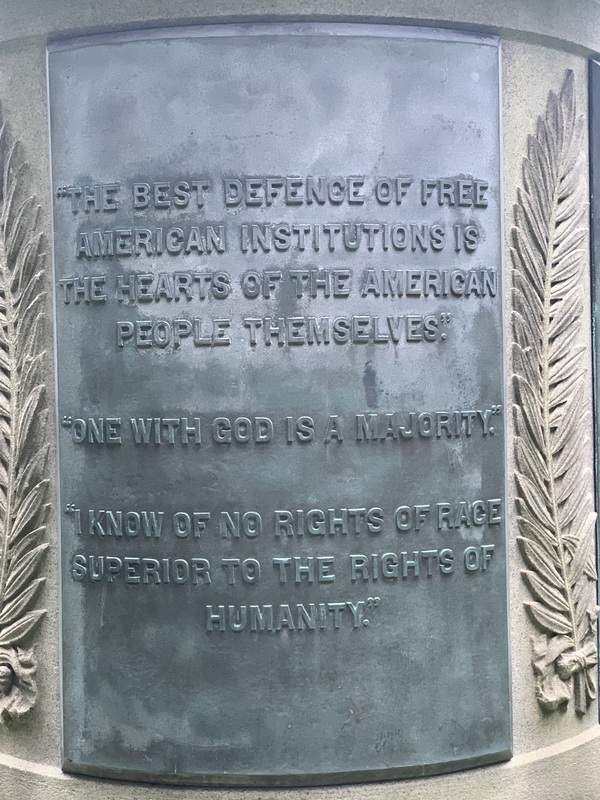 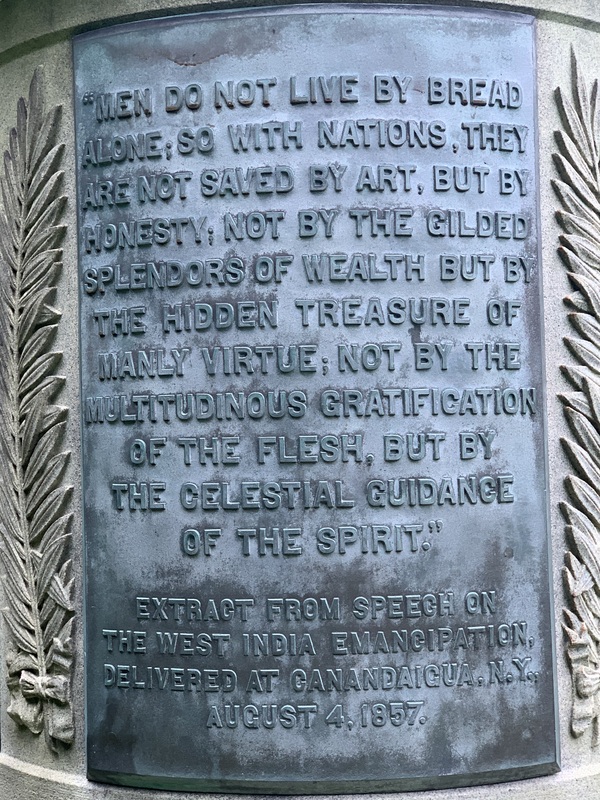 Sculptor Stanley W. Edwards modeled Douglass with his shoulders back, feet planted squarely forward, and his arms outstretched with his palms open as if he were addressing an audience. Mounted on the statue's pedestal are four bronze plaques, three of which are inscribed with quotes from Frederick Douglass. Photos of the monument were taken in Highland Bowl, Highland Park, Rochester, New York.

Inscription on plaque (facing the monument to the south):
Frederick Douglass

Inscription on plaque (facing the monument to the east):
“I know no soil better adapted to the growth of reform than American soil. I know of no country, where the conditions for effecting great changes in the settled order of things, for the development of right ideas of liberty and humanity are more favorable than here in these United States.” Extract from speech on Dred Scott Decision, delivered in New York, May 1857.

Inscriptions on plaque (facing the monument to the north):
“The best defense of free American institutions is the hearts of the American people themselves”.

“One with God is a majority.”

“I know no rights of race superior to the rights of humanity.”

Inscription on plaque (facing the monument to the west):
“Men do not live by bread alone; so with nations, they are not saved by art, but by honesty; not by the gilded splendors of wealth, but by the hidden treasures of manly virtue; not by the multitudinous gratification of the flesh, but by the celestial guidance of the spirit.” Extract from speech on The West India Emancipation, delivered at Canandaigua, N.Y., August 4, 1857

Location:
This monument was originally located in front of the old New York Central Train Station (St. Paul Street and Central Ave) in Rochester, New York. In 1941, the work was moved to Highland Bowl, a part of Highland Park, close to the location of Douglass' farm (no longer extant) on South Avenue. As of December 4, 2019, the City of Rochester moved the statue to the Frederick Douglass Memorial Plaza (South Avenue and Robison Drive).