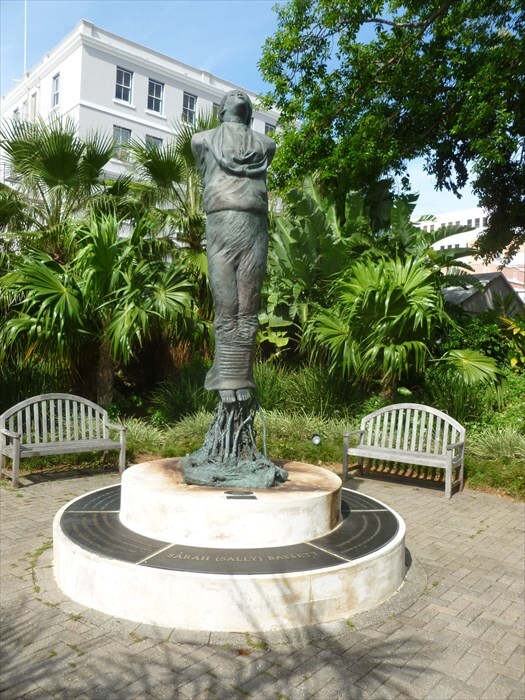 In 1730, the colonial government of Bermuda executed Sarah Bassett, an enslaved woman, for allegedly attempting to poison her granddaughter’s enslavers. In Spirit of Freedom, she is shown with her hand and feet bound, as she gazes defiantly upward.

The lower step of the base of the statue is divided into six segments. The segments are inscribed with events from Sarah Bassett Life:

Sarah (Sally) Bassett was an enslaved woman
Owned by the estate of Francis Dickinson of Southampton
On June 1, 1730, she was tried on the "Suspicion of Poisoning several persons" including the mariner Thomas Forester (who owned sally's granddaughter beck). His wife Sarah for, and Nancey, a household bondswoman.
Sally was charged with supplying beck with the poison that Nancey discovered in the wall of the Kitchen outlet. Although sally maintained her Innocence, stating that she "Never deserved" the Sentence given, she was burned at the stake for the offence.
Local lore holds that it was extremely hot when Sally was executed; and even now, Bermudians may Refer to a scorchingly hot day as "A real Sally Bassett day".
At the time of her sentencing, sally was valued at One pound, four shillings and sixpence. Another local Legend says that Bermuda's national flower, the Bermudiana, grew from sally's ashes.
A pair of bronze plaques on the upper step of the base of the statue inscribed:

Slavery Monuments in the Caribbean