What are the terms related to sculpture and monuments? 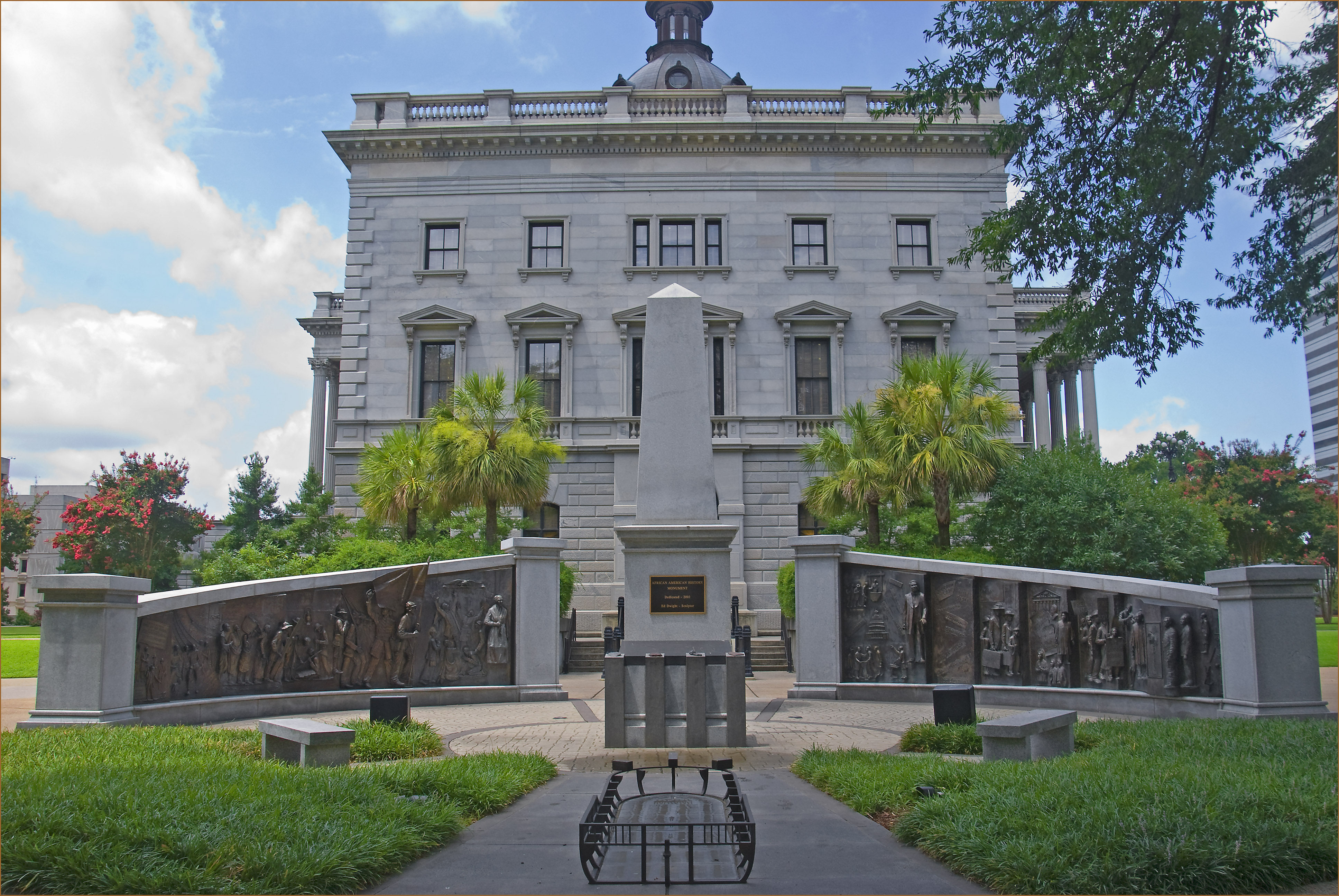 Sculpture is an artistic form in which hard or plastic materials are made into three-dimensional art objects. Below are some basic terms related to sculpture and monument making. Most of the monuments and memorials on this site use traditional materials such as bronze, granite, and marble and rely on figuration.

For the South Carolina African-American History Monument, pictured above, Ed Dwight used a variety of materials including granite, bronze, steel, and four rubbing stones from various parts of Africa. For the main sections of the monument, the two wings on either side of the central granite obelisk, Dwight designed twelve bronze bas-relief panels to convey the historical narrative. He first created the panels in clay and then made molds from the clay sections in order to realize the bronze castings. He also deployed various patinas on the reliefs to add dimension and coloristic effects.

additive process: process in sculpture whereby materials are added to the surface, such as combining or building up material from a core or armature using materials such as clay.

alloy: a substance made by the mixture of two or more elements, at least one of which is a metal. Alloys are often stronger and more durable than pure metals.  Bronze is an alloy of copper and either zinc or tin.

armature: an internal support to hold the outer covering of a sculpture; may be made of various materials such as wood, wax, steel, but generally in the contemporary moment aluminum wire.

bas-relief: a sculpture that is slightly raised from a background.

brass: a yellowish metal that is an alloy of copper and zinc.

bronze: a brownish metal that is an alloy consisting primarily of copper, with lesser amounts of tin, zinc, and lead.

bust: a sculpted or cast representation of the upper part of the human figure, depicting a person's head and neck, and a variable portion of the chest and shoulders.

carving: a subtractive process in which a sculpture is formed by removing material from a block or mass of wood, stone, or other material, using sharpened tools.

casting: a process that involves pouring liquid material such as molten metal, clay, wax, or plaster into a mold. When the liquid hardens, the mold is removed, leaving a form in the shape of the mold.

contrapposto: the disposition of the human figure in which one part is turned in opposition to another part (usually hips and legs one way, shoulders and chest another), creating a counter-positioning of the body about its central axis. Sometimes called weight shift because the weight of the body tends to be thrown to one foot, creating tension on one side and relaxation on the other.

copper: a reddish-brown, malleable metal that is corrosion resistant.

corten steel/COR-TEN steel: weathering steel, often referred to by the  trademark COR-TEN steel and sometimes written without the hyphen as corten steel, is a group of steel alloys which were developed to eliminate the need for painting, and form a stable rust-like appearance after several years' exposure to weather.

freestanding sculpture: also known as sculpture in the round, carved or modeled in three dimensions so that you can walk around the sculpture and see from all sides.

granite: hard natural igneous rock used in building and monuments. Occasionally used by stone sculptors for carving but due to its hardness is not considered a primary carving stone.

inscription: a piece of material, such as a stone or bronzel tablet, that is inscribed with text.

investment: in bronze casting, an outer layer, slurry, or coating that can withstand the heat of the bronze after the wax model has been melted away.

kinetic sculpture: sculpture that moveseither by air currents such as mobiles, or by a power source installed by the artist.

mass: three-dimensional form having physical bulk, also the illusion of such a form on a two-dimensional surface.

maquette: a maquette is a scale model or rough draft of an unfinished sculpture. An equivalent term is bozzetto, from the Italian word for "sketch". A maquette is used to visualize and test forms and ideas without incurring the expense and effort of producing a full-scale piece

medium: the substance in which an artist works, for example, clay or marble for a sculptor.

modeling: the shaping or fashioning of three-dimensional form in a soft material, such as clay or wax.

mold: hollow cavity produced around a subject for use in creating duplicates of that subject in plaster, bronze, cast stone, etc. The mold is considered the negative and produces a positive cast.

mold making: constructing a covering, shell, or coating, in single or multiple pieces, from which reproductions of the original can be made.

patina: the sheen on any surface, produced by age, use, and/or addition of organic materials. Many bronze sculptures have artificial patinas added to their surfaces. There are two types of patinas, those applied though firing on or chemical reactions in the foundry and artistic patinas that are applied with colors, varnishes and waxes. The natural bronze patina on statues is caused by oxidation and the weather.

pedestal: the base on which a pillar or statue stands. Often used interchangeably with plinth.

plaster of Paris: quick-setting gypsum consisting of a fine white powder (calcium sulfate hemihydrate), which hardens when moistened and allowed to dry. Known since ancient times, plaster of paris is so called because of its preparation from the abundant gypsum found near Paris. Plaster of Paris does not generally shrink or crack when dry, making it an excellent medium for casting molds.

plinth: a block or slab that is used as the base for a pillar or statue. Often used interchangeabley with pedestal.

register: one of a series of superimposed bands in a pictorial narrative, or the particular levels on which motifs are placed.

relief sculpture: figures project from a background of which they are part. The degree of relief is designated high (the object projects at least half of their natural circumference from the background), low (bas-relief), and sunken (hollow).

scale: the size or apparent size of an object seen in relation to other objects, people, or its environment.

stele: a stone or wooden slab, generally taller than it is wide, erected in the ancient world as a monument. The surface of the stele often has text, ornamentation, or both. These may be inscribed, carved in relief, or painted. Modern artists have also used various metals as stele, including corten steel.

subtractive process: process in sculpture whereby materials are carved or removed from the surface, as in works made of wood or stone.

three dimensional: having the dimensions of height, width, and depth.

wax: substance derived from petrolatum refined to be soft, pliable, used for modeling and casting.

wax, positive: wax cast from the mold that will be invested or coated with slurry then melted out. A bronze cast will result when molten bronze is poured into the cavity.