The monuments in this collection examine the intertwined histories of American universities and slavery. In his book, Ebony and Ivy: Race, Slavery, and the Troubled History of America’s Universities, Craig Steven Wilder examines how universities and colleges were established and expanded because of the massive wealth they accrued from the transatlantic slave trade and slavery. Slave traders became the principal financiers of endowed faculty chairs and were appointed as university trustees, and colleges and universities made special efforts to recruit the sons of the slaveholding elite. Presidents of universities also held Black people in bondage, for example, Princeton’s first nine university presidents owned enslaved people.

Universities and colleges such as the University of Virginia have recognized how enslaved people labored on their campuses, waiting on faculty and students and tending to their grounds. Just as importantly, the classes at many universities upheld the logic of racism foundational to American slavery. As researchers at Rutgers found, “The faculty and curriculum at Rutgers and other early American colleges reinforced the theological and scientific racism that provided the ideological and spiritual justification for the free labor of Africans, the absolute power of slave owners, and the separation of the races.”

Often responding to pressure from students and activists, universities and colleges across the United States have begun to think more critically about how to address the complex, untold, and painful history of slavery and its ongoing legacy on their campuses. The memorials in this collection, such as the University of Virginia’s Memorial to Enslaved Laborers are intended as spaces for learning, healing, and reconciliation. In addition to building monuments, universities are also attempting to redress and repair their relationship with communities most affected by slavery. William and Mary’s Lemon Project, for example, focuses on “contributing to and encouraging scholarship on the 300-year relationship between African Americans and William and Mary, and building bridges between the university and Williamsburg and Greater Tidewater area.” 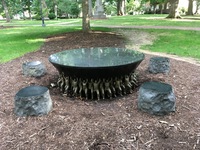 The memorial includes a stone tabletop supported by 300 bronze male and female African American figures, their arms raised over their heads as they collectively hold the weight of the tabletop. The differing dress of the figures-- some are shown in…

Located near University Hall, the oldest building on campus and constructed with the labor of enslaved persons, the memorial has two distinct features: a sculpture and a stone plinth. The sculpture consists of a massive ductile-iron chain, which…

Memorial for Enslaved Laborers (The University of Virginia, Charlottesville, VA)

According the artists, historians and architects involved with the project, they seeks to create:"The design of a new Memorial to Enslaved African American Laborers on the grounds of the University of Virginia marks a critical moment to address the… 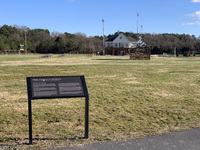 "In From Absence to Presence, the tectonic form of a slave quarter materializes from the ground up evoking how this history was uncovered from archaeological research – making the invisible visible. The surfaces are gradated in a pattern of staggered…
View all 4 items