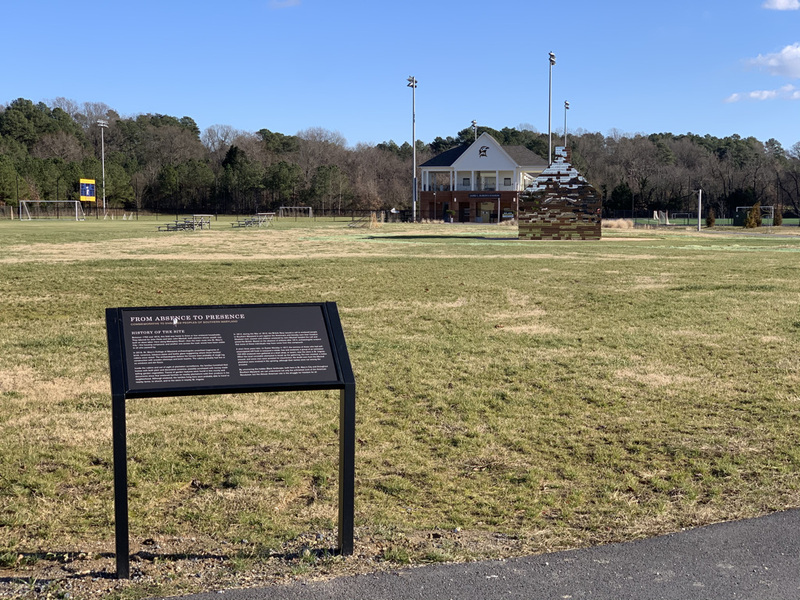 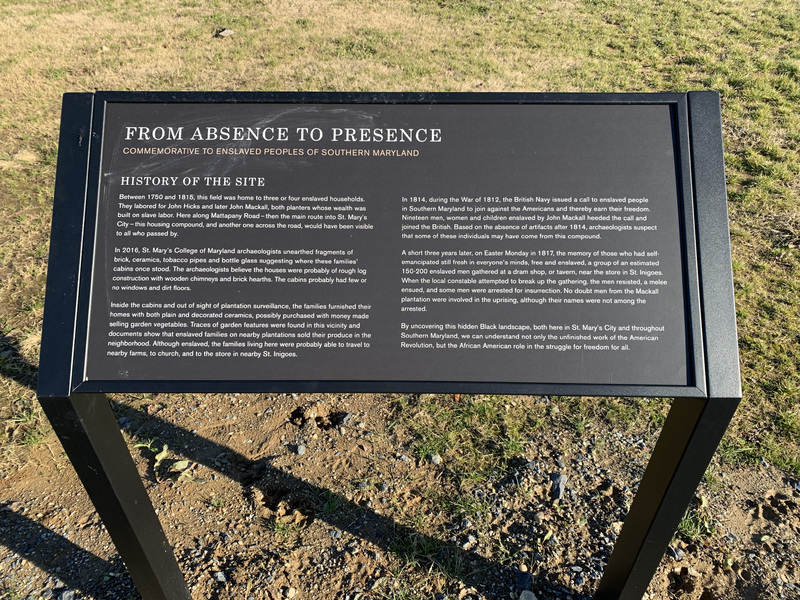 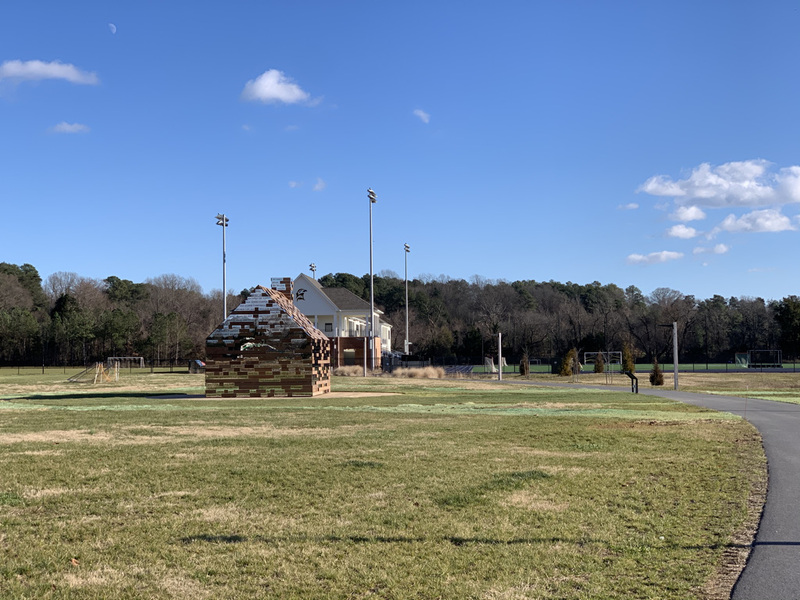 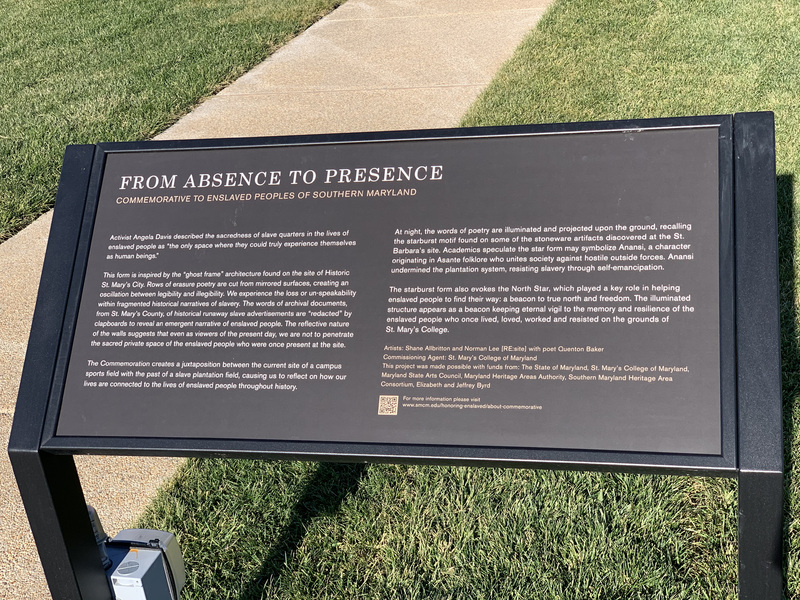 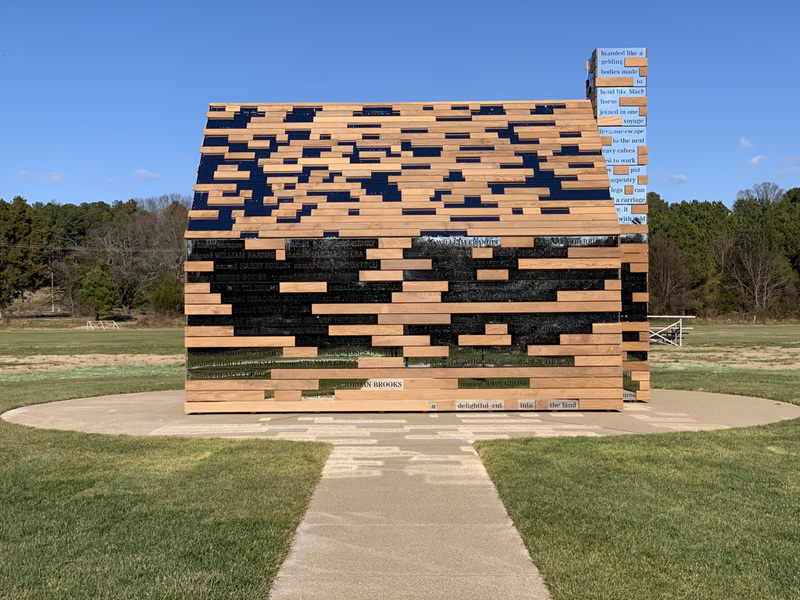 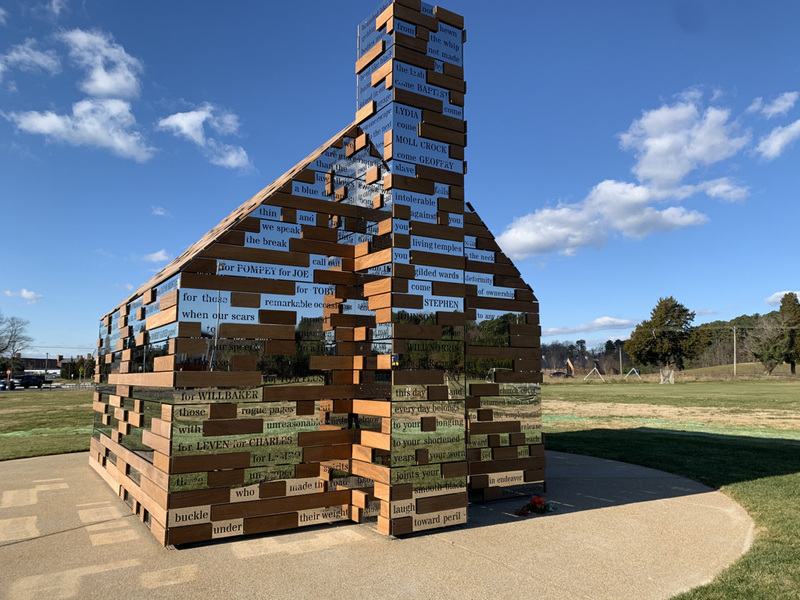 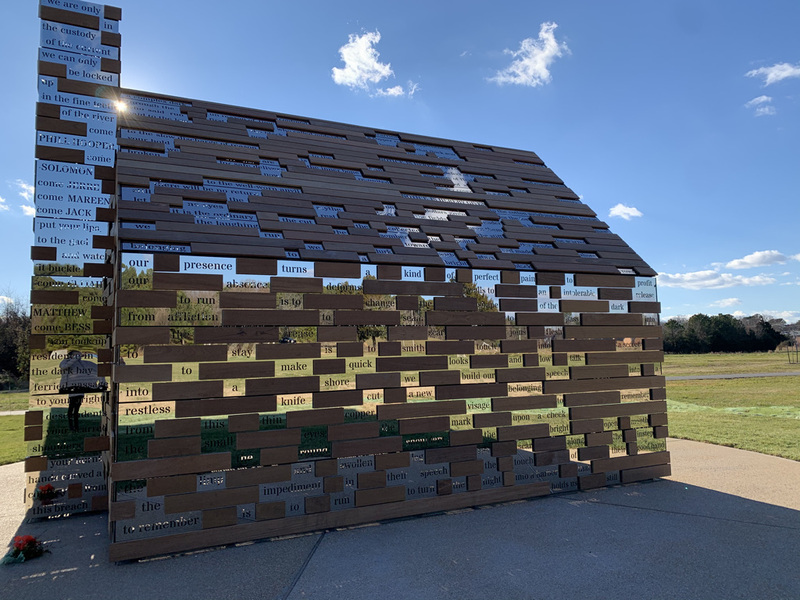 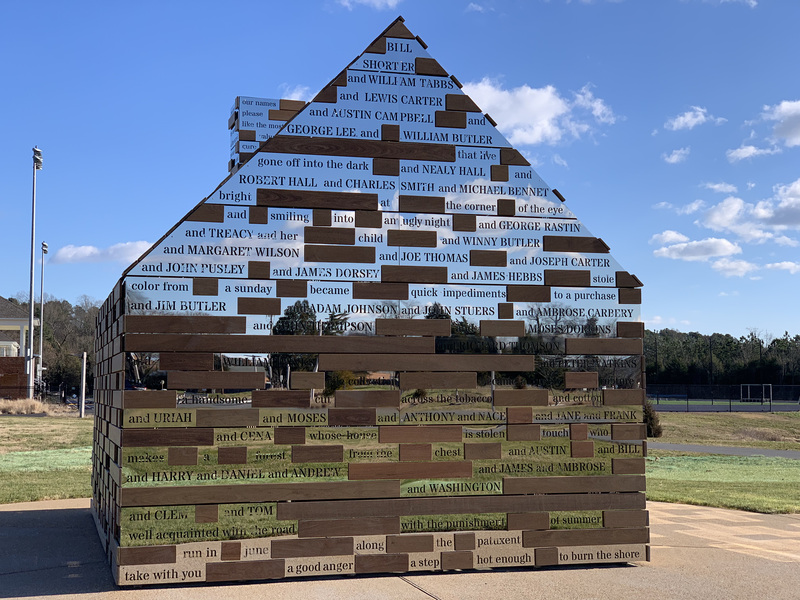 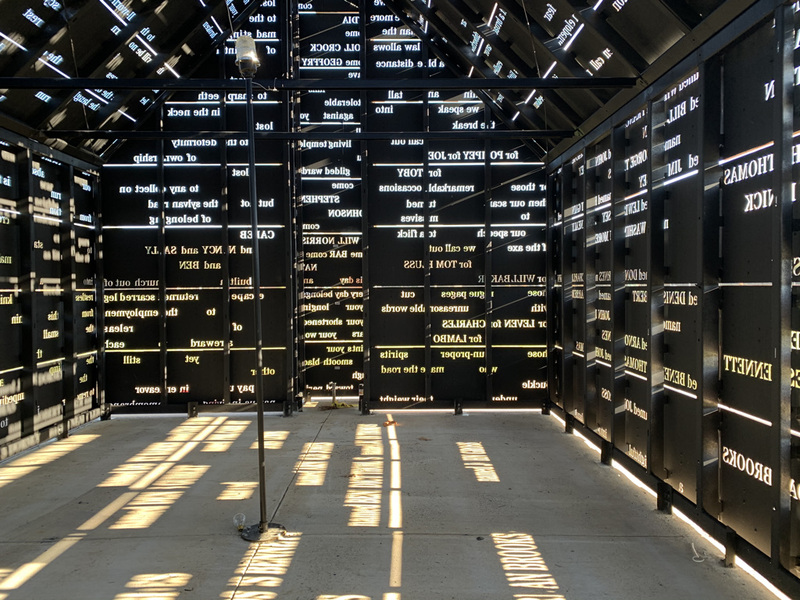 "In From Absence to Presence, the tectonic form of a slave quarter materializes from the ground up evoking how this history was uncovered from archaeological research – making the invisible visible. The surfaces are gradated in a pattern of staggered and alternating Ipe wood clapboard and mirror-polished stainless steel, recalling the staggered pattern of erasure poetry. In our design, rows of text on mirrored surfaces are “redacted” by clapboards to dramatically reveal an emergent narrative. Activist Angela Davis described the sacredness of slave quarters in the lives of enslaved peoples as “the only space where they could truly experience themselves as human beings.” As artists, we envision the private space of the slave quarters as a symbol of resilience, determination, and persistence." From RE:site Studio.

History of site information plaque:
From Absence to Presence
Commemorative to Enslaved Peoples of Southern Maryland

History of the Site
Between 1750 and 1815, this field was home to three or four enslaved households. They labored for John Hicks and later John Mackall, both planters whose wealth was bulit on slave labor. Here along Mattapatty Road--then the main route into St. Mary's City--this housing compound, and another one across the road, would have been visible to all who passed by.

In 2016, St. Mary's College of Maryland archaeologists unearthed fragments of brick, ceramics, tobacco pipes and bottle glass suggesting where these families' cabins once stood. The archaeologists believe the houses were probably of rough log construction with wooden chimneys and brick hearths. The cabins probably had few or no windows and dirt floors.

Inside the cabins and out of sight of plantation surveillance, the families furnished their homes with both plain and decorated ceramics, possibly purchased with money made selling garden vegetables. Traces of garden features were found in this vicinity and documents show that enslaved families or nearby plantations sold their produce in the neighborhood. Although enlsaved, the families living here were probably able to travel to nearby farms, to church, and to the store in nearby St. Inigoes.

In 1814, during the War of 1812, the British Navy issued a call to enslaved people in Southern Maryland to join against Americans and thereby earn their freedom. Nineteen men, women, and children enslaved by John Mackall heeded the call and joined the British. Based on the absence of artifacts after 1814, archaeologists suspect that some of these individuals may have come from this compound.

A short three years later, on Easter Monday in 1817, the memory of those who had self-emancipated still fresh in everyone's minds, free and enslaved, a group of an estimated 150-200 enslaved men gathered at a dram shop, or tavern, near the store in St. Inigoes. When the local constable attempted to break up the gathering, the men resisted, a melee ensued, and some men were arrested for insurrection. No doubt men from the Mackall plantation were involved in the uprising, although their names were not among the arrested.

By uncovering this hidden Black landscape, both here in St. Mary's City and throughout Southern Maryland, we can understand not only the unfinished work of the American Revolution, but the African American role in the struggle for freedom for all.
Object information plaque:
From Absence to Presence
Commemorative to Enslaved Peoples of Southern Maryland

Activist Angela Davis described the sacredness of slave quarters in the lives of enslaved people as "the only space where they could truly experience themselves as human beings."

This form is inspired by the 'ghost frame' architecture found on the site of Historic St. Mary's City.
Erasure Poetry
" Erasure poetry is a form of found poetry that is created by erasing, or redacting, words from an existing piece of prose or verse. The redactions allow poets to create symbolism while also putting a focus on the social and political meanings of erasure. New questions, suggestions, and meanings in existing pieces of writing are revealed through erasure poetry. The erasure poetry that covers the structure is adapted from historical documents related to the Mackall-Brome plantation — one of three known plantations located on the land around St. Mary’s City. These documents include slave property and runaway slave advertisements, newspaper articles, and slave depositions of the Mackall-Brome family. These poems become the walls and roof of the structure revealing powerful stories hidden within the language of a dark past. " From About the Commemorative.

"About the Commemorative." St. Mary's College of Maryland. Accessed May 3, 2021, https://www.smcm.edu/honoring-enslaved/about-commemorative/.