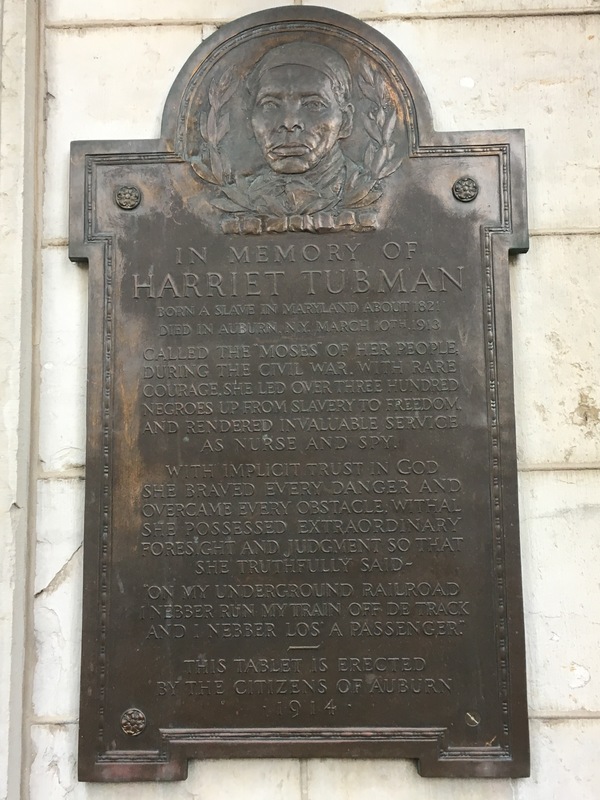 Tablet erected in 1914 at the main entrance to the Cayuga County Courthouse in Auburn, New York. The text reads: “In Memory of Harriet Tubman. Born a slave in Maryland about 1821. Died in Auburn, NY, March 101th, 1913. Called the Moses of her people during the Civil War. With rare courage, she led over 300 hundred Negroes up from slavery to freedom and rendered invaluable service as a nurse and spy. With the implicit trust in God she braved every danger and overcame every obstacle, withal she possessed extraordinary foresight and judgment so that she truthfully said ‘On my Underground Railroad I nebber run my train off de track and I nebber los’ a passenger.’ This tablet is erected by the citizens of Auburn, 1914.”

Harriet Tubman’s steadfast dedication and her radical actions to free her family and friends from enslavement on the Eastern Shore of Maryland has inspired public officials and communities in the United States to recognize her through monumental art. A story map shows that nearly a dozen public memorials now mark the landscape honoring her. Through her memorialization in bronze, Tubman stands as an American hero in civic spaces. As Milton Sernett notes, “In spite of the difficulties of constructing an accurate history of her life, our individual and collective memories of her resonate so strongly because Harriet Tubman’s life story causes us to reflect on both the good and the bad in the larger American story.” Her determination to be free and her “self-sacrificial efforts to help others,” Sernett argues “underscore values that we as Americans treasure in custom and law, beginning with the founding of the Republic of the United States.”[1]

Tubman’s persistence in the face of racism, violence, and poverty is the story of the great American hero. Today, public officials and their constituents want a connection to Tubman because of her mythic ascension from slavery to freedom. Along former Underground Railroad routes in Maryland, Delaware, Pennsylvania, New York, and Ontario, Tubman’s story exemplifies bravery and resolute faith. To commission a bronze statue, reflects these communities dedication to retelling American history and the complicated nature of American democracy. Communities want representations that make Tubman’s bodily form and heroic actions visible for all to see. She has come to symbolize extraordinary leadership in the face of seemingly insurmountable odds, and to embody the role of community-builder and humanitarian.